Post nightshift, dragging ourselves out of bed on a few hours sleep, traveling to Edinburgh via train on a rainy Thursday afternoon probably didn’t seem like the greatest of ideas to either of us. Getting on the wrong train because sleepy brains probably seemed like a portent of things to […]

2017 has been a cracking year for me. Lots of travel, lots of places to go and things to see. I’ve been sat here on New Year’s Eve Eve reviewing some of the places I’ve been and the things I’ve seen. And here’s a sample and a reminder. Where I […]

Berlin, October 2017. It’s a city which still captures the imagination of historians, involved as it was in World War II, The Third Reich, and the Holocaust. Earlier this year I had the opportunity to visit Auschwitz as part of a weekend in Krakow. I wrote about that back in […]

August 2017, Crete, drunk, happy. Warm weather and an empty beach. Let’s do this: 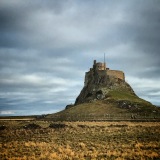 Lindisfarne, Holy Island as the sun went down on a Saturday late afternoon in January. I don’t think I ever experienced such peace. A silence fell across the place, looking out over the water towards the mainland. I’m not religious. I wouldn’t even dare to consider myself spiritual, but there […]