Berlin, October 2017. It’s a city which still captures the imagination of historians, involved as it was in World War II, The Third Reich, and the Holocaust. Earlier this year I had the opportunity to visit Auschwitz as part of a weekend in Krakow. I wrote about that back in April. It seemed natural to add Berlin to the destinations of interest. If Auschwitz stands as a memorial to the end of Jewish struggle in Europe, Berlin is certainly the epicentre of that struggle’s beginning.

We jetted in on a Friday afternoon and made our way to our hotel at Alexanderplatz, right in the centre of the city. Directly opposite our hotel is the famous Fernsehturm (TV Tower). We never got the chance to go up the tower, but our hotel had a viewing platform some 150 metres up affording beautiful views of the city. Everything seems so different when viewed from above.

Our first night was really a finding your feet exercise, and we spent too much time getting about from Alexanderplatz to Potsdamer Platz (and back again) looking for the famous Berlin nightlife. Eventually we ended up in a surreal re-used industrial area of bars and clubs, and got to sample the Berlin club scene. I’m no clubber and definitely felt like a fish out of water in a warehouse/garage frequented by kids in scruffs and noise which, to those with younger ears, must pass for music. We didn’t last long in this strange venue, and soon retired to find a currywurst and a taxi back to the hotel. 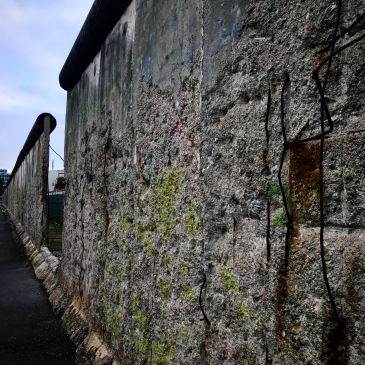 Saturday we started early and tackled the main tourist areas of Berlin. The Reichstag, Bradenburg Gate, Berlin Wall. Before being drawn to the Spy Museum and finally the Topography of Terror, the old Gestapo Headquarters. Berlin seems like a city in a permanent state of apology; A city of honest, pragmatic apology. “I feel I must apologise for the conduct of my nation in the war,” to borrow from Harry Enfield’s Jurgen. You didn’t have to travel far to happen upon some monument to the atrocities committed by the Nazi’s against any number of different people’s. There was no shame in these tributes and exhibits. They said quite clearly, “it happened, we accept it happened, we don’t want to forget it, but we’re sorry.”

And everywhere pieces of the Berlin Wall stand. Some in place where they stood from first erection, others moved and replanted in parks and on lawns, others tucked against the sides of buildings, each a testament to one of the darkest times in modern European history, a divided Germany. It’s this division which gives Berlin it’s flavour. it doesn’t feel like a modern western european city. It’s edges are rough, it’s shadows are eerie. The influences of the east and of communism still lay over the city. It’s not with any sense of foreboding, but rather lends a further dimension to it’s urban areas. It just felt dark. I wish I could phrase the feeling Berlin caused adequately, but it’s perhaps something to be experienced rather than read about. Like describing the feeling of concrete; words do not do justice. You have to run your fingertips over the surface and feel it for yourself.

Saturday night, all cultured out, we searched for some nightlife more in keeping with our middle-aged minds and bodies. Our taxi driver recommended a club to us called ‘Matrix Club’ and it didn’t disappoint. The one thing that sticks with me is how safe it felt. We were searched and ID’d on the way in, and the place was rammed from roof to floor with people young and old, groups, couples, individual guys looking for action. There was cages where dancers impressed with hot bodies and athletic movements. Despite all that, despite the size, the people, the music, the lack of light, it just felt safe. We partied until 4am. And it was only the threat of losing Sunday to hangovers and sleep that we eventually left that place and headed back to our hotel.

Sunday can be summed up quite simply as The Jewish Museum. A tribute to the history of Jews in Europe, and a commemoration to the victims of the Final Solution. Set across multiple levels and in multiple buildings, the museum is designed to expose you – psychologically rather then physically – to the fate of Europe’s Jews during the Second World War. I want to impress upon you the importance of this place. It wasn’t fun and it wasn’t easy. It’s designed to make you think but you’re never too sure how it wants you to think, and perhaps each person’s experience of the museum will be different. We were there for several hours, immersed in history; The journey through the time-line of Europe’s Jews providing an insight into what happened in the 20th century. Jewish persecution began hundreds of years previously.

I wrote of Auschwitz:

“I believe that everyone should visit Auschwitz at some point in their lives. It needs to be a lesson that everyone is made aware of so that we do all we can to ensure such horrors never happen again.”

And this applies to Berlin, and the museum too. Go to the city, feel it, don’t just see it. And go to the Jewish museum. Understand why we, collectively as the human race, allowed such horrors and travesties to occur. With the emergence of the Far Right, and the rise of Donald Trump, Marine Le Pen, Golden Dawn in Greece and any number of other extremist parties and personalities, it’s vitally important we do not forget. That’s the only way to prevent it from happening again.